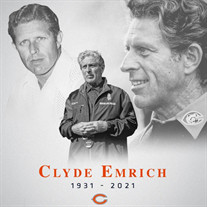 Clyde B. Emrich, 90, passed away on November 10, 2021, in Deerfield, IL. He was born April 6, 1931, in Chicago and had been living in Lake Bluff, IL for the past twenty-seven years. As a young man Clyde found a passion for weightlifting that would take him across the world including the 1952 Olympics. He would later go on to break two World Records and compete at an elite international level. Clyde would give two years of his life to serve his country in the United States Army, and as an athlete he toured the world on goodwill missions for the military. Upon returning from the military, he would continue his passion for weightlifting in the evenings at the Irving Park YMCA. During the days he worked for the Hartford Insurance Company as a claims adjuster. It was at the YMCA that Clyde would meet fate after working with several Chicago Bears football players. In 1963 he had his first official contact with the Bears organization. The rest became a dream come true when George Halas hired him in 1971 to be the team’s first strength coach. Clyde became the longest tenured staffer for the Chicago Bears. He worked for the team for 50 years until his passing. During that time, he was given the nick name “Legend” and after getting to know him, you realized the name fit. Clyde enjoyed photography, astronomy, shooting, and reading about history. Clyde truly cared about his family and friends and will be missed by all who knew him. He shared his passion for weightlifting with anyone who would ask. His sons, and now his grandchildren continue to carry that torch forward. Always willing to help anyone at the drop of a hat if they asked for training advice. He was a humble man that touched so many lives in this world to which the extent shall be spoken about for generations. Surviving are his two children, Jon (Marnie) and Ken (Lisa) Emrich; four grandchildren, Maddie, Brett, Bryan, and Lauren; and many nieces, nephews, and cousins. He was preceded in death by his four sisters, Mary, Marguerite, Irene, Patricia, Celeste, and brother Richard. Visitation will be 3:00 PM to 8:00 PM on Monday, November 15, at Burnett-Dane Funeral Home, 120 W. Park Ave. (Rte. 176 one block west of Milwaukee Ave.) Libertyville, IL. Funeral service, 11:00 AM on Tuesday at St. Joseph Church, 121 E. Maple Drive, Libertyville, IL. Private interment at Maryhill Cemetery in Niles. Memorial donations may be made to Team USA Weightlifting at www.teamusa.org For info: (847)362-3009 or please share a memory or leave a condolence at www.burnettdane.com. https://www.chicagobears.com/news/bears-lose-the-legend-with-passing-of-clyde-emrich

Clyde B. Emrich, 90, passed away on November 10, 2021, in Deerfield, IL. He was born April 6, 1931, in Chicago and had been living in Lake Bluff, IL for the past twenty-seven years. As a young man Clyde found a passion for weightlifting that... View Obituary & Service Information

The family of Clyde B. Emrich created this Life Tributes page to make it easy to share your memories.

Send flowers to the Emrich family.