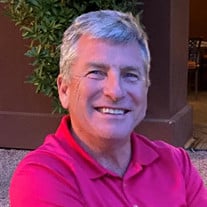 Christopher G. McClain, 64, passed away unexpectedly on July 22, 2021. He was born Sept. 10, 1956, in East St. Louis, IL to Elmo and Margaret McClain, and spent his childhood in Quincy, IL. He was a resident of Palatine, IL and Grayslake, IL, and has resided in Lincolnshire, IL for the last six years. Chris was a devoted husband, father, brother, son, uncle, Papa and friend, who lived life to the fullest. He never met a stranger, and was loved for his generosity, kindness and wonderful sense of humor, with a huge, infectious smile for everyone. Chris was an avid golfer, a world-traveler and a huge Illini fan. The only time his family ever saw him angry was witnessing their losses. He was happiest spending time with his friends and family, from backyard barbecues to big family reunions, to quiet dinners at home with immediate family. He especially loved playing with his two young granddaughters. He attended Catholic Boys High School in Quincy, was a proud graduate of University of Illinois Urbana-Champaign and held an MBA from Loyola University. He held numerous financial leadership positions for the Motorola Corporation from 1979-2007, most enjoying his position at MCSI. In 2008 made a career change, taking the role of Assistant Superintendent for the Glenbard School District, retiring in June 2021. He also served on the school board for Grayslake Community High School District 127 from 1995-2007. He is survived by his loving wife of 42 years, Mary Lou Schutte McClain; 3 children Laura Elizabeth McClain, Tyler James (Kristen) McClain; and Brian Patrick McClain; 3 granddaughters Avery Clara, Harper Margaret and Elle James McClain; 2 brothers Michael McClain and Kevin McClain; 4 sisters, Kathy Henigan, Molly Stroot, Mary Grant and Anne Sidrys, and brother-in-law Philip (Flip) Schutte, He was also a loving uncle and great-uncle to 34. He is preceded in death by his father, Elmo McClain, mother, Margaret McClain, and brother Patrick McClain. Visitation will be held on Tuesday, July 27 from 4-8 p.m. at Burnett-Dane Funeral Home at 120 W. Park Ave., Libertyville, IL. A prayer service will be held on Wednesday, July 28, at the same location at 11 a.m. A celebration of life will follow at the North Bay Pavilion at Independence Grove at 16400 Buckley Rd, Libertyville. In lieu of flowers, the family requests donations to organizations near and dear to his family’s heart, including the Northern Illinois Food Bank, The Alzheimer’s Association and The American Cancer Society.

Christopher G. McClain, 64, passed away unexpectedly on July 22, 2021. He was born Sept. 10, 1956, in East St. Louis, IL to Elmo and Margaret McClain, and spent his childhood in Quincy, IL. He was a resident of Palatine, IL and Grayslake, IL,... View Obituary & Service Information

The family of Christopher G. McClain created this Life Tributes page to make it easy to share your memories.

Send flowers to the McClain family.