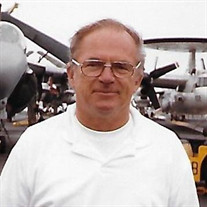 Chester John Szech passed peacefully at the age of 94 in his home in Libertyville, Illinois on September 6, 2019. He was born June 20, 1925, in North Chicago, Illinois to John and Mary Szczech. He attended Holy Rosary School and graduated from Waukegan High School in 1943. After graduation Chester enlisted in the US Navy and was sent to Idaho for basic training and then to San Diego to train as a Hospital Corpsman. He was then assigned to Headquarters Company, 3rd Battalion, 6th Marines, 2nd Marine Division. He was deployed to both Saipan and Tinian in the Mariana Islands in 1944 where he was part of the push to retake the islands. After the war Chester was awarded the Bronze Star Medal with the "V" device to denote heroism, the fourth highest military decoration for valor, for his actions during the battle of Tinian. Victories on Saipan and Tinian contributed to Japan’s subsequent surrender and the end of the war. Throughout his life, Chester’s Bronze Star remained an unwavering source of pride as was his connection with the Marines. In 1994, he returned to the Mariana Islands to celebrate the 50th Anniversary of the Battle of Saipan. After the war he attended Lake Forest College on the GI Bill graduating in 1950. Chester worked as a lather and also taught school in Gavin and North Chicago school districts, retiring from teaching in 1986. He was a member of the Carpenter’s Union, past president of the Illinois Chapter of the 2nd Marine Division Association, and a founding member of the Foss Park Golf League. He enjoyed spending time with his friends and family, golfing, fishing, reading about the war in the South Pacific, and doing crossword puzzles. Chester is survived by his wife, Vicki; his son John (Karen), daughter Mary (Donald Popetz,) and son Andrew; five grandchildren and four great-grandchildren. He is preceded in death by his parents and ten brothers and sisters; his first wife, Patsy; and his daughter, Rachel Visitation will be from 4 to 7 pm Thursday, Sept. 12 at the Burnett-Dane Funeral Home, 120 W. Park Ave. (Rt. 176, one block west of Milwaukee Ave.) Libertyville and for one hour prior to the service on Friday. The service will be at the funeral home at 11 am Friday, Sept. 13 with interment and military honors to follow at Ascension Cemetery. In lieu of flowers donations may be made to the Michael J. Fox Foundation for Parkinson’s Research, Donation Processing, The Michael J. Fox Foundation, P.O. Box 5014, Hagerstown, MD 21741-5014 or Semper Fi Fund, Santa Margarita Road, Building H49, Camp Pendleton, CA 92055 Info: 847-362-3009 or please share a memory at www.burnettdane.com.

Chester John Szech passed peacefully at the age of 94 in his home in Libertyville, Illinois on September 6, 2019. He was born June 20, 1925, in North Chicago, Illinois to John and Mary Szczech. He attended Holy Rosary School and graduated... View Obituary & Service Information

The family of Chester "Chick" Szech created this Life Tributes page to make it easy to share your memories.

Chester John Szech passed peacefully at the age of 94 in his...

Send flowers to the Szech family.