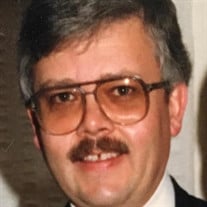 Dr. Charles V. “Chuck” Holmberg, 72, passed away Thursday, June 10, 2021 at home in Libertyville. He was born May 12, 1949 in Waukegan to Edward and Shirley Holmberg. He graduated from Waukegan Township High School in 1967 and went on to earn a Medical Degree from the University of Illinois College of Medicine in 1978. He practiced as a Doctor of Internal Medicine in Waukegan and Gurnee for 32 years. Chuck loved the NorthWoods of Wisconsin and was never happier than when he was fishing on Forest Lake with a MGD in hand. He and his brother, Bob, owned a cabin together in Land O'Lakes where so many good times were had, so many fish were caught and so many wonderful memories were made. He was an avid Chicago Blackhawks fan. His two sons, Brian and Kevin, played hockey and he enthusiastically enjoyed watching them out on the ice. Chuck was one of the founding fathers of the Libertyville High School hockey club. He also regularly bowled at Grand Bowl on a team sponsored by one of his favorite restaurants, Quonset Pizza. Chuck is survived by his wife of 42 years, Kathy; two sons, Brian and Kevin (Kate); granddaughter, Mya; two sisters, Sherri Merino and Kim (Tony) Villalpando; sister-in-law, Ann (Barnas) Holmberg; and by many nieces, nephews and cousins. He is preceded in death by his father, Edward; mother, Shirley; brother, Bob; sister-in-law, Sally (Novak) Holmberg; and brother-in-law, Joe Merino. A Celebration of Life will be held on July 24, 2021 from 1:00 to 4:00 p.m. with a service beginning at 3:00 p.m. at Burnett Dane Funeral Home in Libertyville. In lieu of flowers, please consider a donation to the National Multiple Sclerosis Society. For info: 847-362-3009 or share a memory at www.burnettdane.com.

The family of Charles "Chuck" Holmberg created this Life Tributes page to make it easy to share your memories.

Send flowers to the Holmberg family.