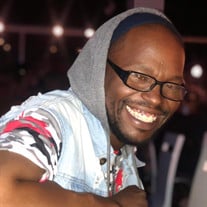 Carrington L. Thomas, 39, passed away on Thursday, May 19, 2022 at home after a life-long battle with kidney disease. He was born April 10, 1983 and raised in Chicago where he graduated from Sullivan High School. At Sullivan he sang in the choir, played football, and played a variety of instruments in the marching band. His passion for singing in high school, led him to sing with different groups, or singing or writing the “hook”. This is where he met his core friends, who he truly called family, and are family to this day. He moved to Waukegan with his mother, and lived in Libertyville for the past 10 years. Carrington is survived by his life partner of ten years, Anthony Huntoon; members of the Thomas and Shannon families; his dear friend Earl Nicholas; his “fur babies,” Sir Elton John and Bentley Jordan; and his many close friends. Carrington‘s life passion was music - from singing in a band, to being anyone and everyone’s hook writer or singer if they asked, singing in church gospel and CLC gospel choirs, to releasing his own projects, and colabs. Any chance he could sing he would. He will be remembered as someone that would light up a room when he walked in and was a great person and beyond a loyal friend. One can truly say that his passion for music ran trough his blood was an understatement, not only that passion was for music, but also for his friends and his family. While fighting many heath battles, he fulfilled a promise to his mother and grandmother; graduating with honors with a Public Health degree from Ultimate Medical Academy and beginning his career in Public Health and Safety. Carrington is preceded in death by his mother, Leslie Thomas, his “dad,” Roy Shannon, his grandmother, and great grandmother. Carrington was loyal, honest, and devoted to anything and everything that he did. The impact of the unconditional love he gave will truly be missed by all. A visitation will begin at 10:00 a.m. followed by a memorial service at 11:00 a.m. on Friday, June 3, 2022 at Burnett-Dane Funeral Home, 120 W. Park Ave. in Libertyville. Memorial contributions would be appreciated to the American Kidney Fund www.kidneyfund.org or Lakeside Cemetery, 500 W. Lake Street, Libertyville, IL 60048. For info: 847-362-3009 or share a memory at www.burnettdane.com.

Carrington L. Thomas, 39, passed away on Thursday, May 19, 2022 at home after a life-long battle with kidney disease. He was born April 10, 1983 and raised in Chicago where he graduated from Sullivan High School. At Sullivan he sang in the... View Obituary & Service Information

The family of Carrington L. Thomas created this Life Tributes page to make it easy to share your memories.

Send flowers to the Thomas family.