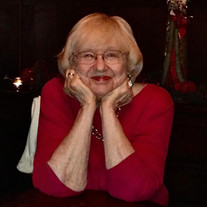 Carolyn Rose Gauer Burrows, daughter of August and Ruth Gauer, was born in November 1924. She passed away peacefully at 96, with her daughter Mary Sue by her side, on November 29, 2020. Born and raised in the Chicago, “Lynn”, as she preferred to be called, enjoyed a wonderful childhood and especially loved summering with her family up at Big Bear Lake in Michigan. After high school, Lynn attended Blackburn College in Carlinville, Illinois, graduating with an Associate of Arts degree. She then went onto study at Northwestern University before joining Montgomery Ward, Inc. in downtown Chicago as a personnel specialist. She was also a “Rosie the Riveter” during WW2, helping construct aircraft for our county’s armed forces during the hostilities. After the war, Lynn met her future husband, Robert W. Burrows and they married in 1948. In July 1949, they welcomed the first of their seven children born to them over the next 16 years. Lynn was happy as a loving stay- at- home mom, while Bob worked downtown at the Board of Trade building, the owner of JC Wood & Co., a commodities brokerage firm. Lynn kept herself quite busy volunteering at church; loved reading; was an avid gardener; and loved doing anything crafty. Later in life she taught herself cross stitching and made Christmas stockings for each of her children, their spouses, and her grandchildren, something that each of us treasures. In the early 70’s, she and Bob moved with their three younger children (Jimmy, Billy and Susie) to Bessemer, Michigan, where they owned the Hedgerow Motel and later purchased an old farmhouse that they re-modeled and opened as Stonegate Farm Supper Club, also in Bessemer. They ran the Supper Club until 1983, when they moved back to the Chicago area to Libertyville, Illinois. After 35 years of marriage, her husband Bob passed away just a few months after their move in 1983. Lynn eventually settled in Vernon Hills, where she managed Pennington Du Canada, an upscale larger woman’s apparel store for several years until its’ closing. After the store closed, Lynn officially retired, BUT .…not really! No moss was going to grow under her feet! With her dear friend Ruth Ann O’Brien by her side, Lynn was soon doing volunteer work at the Chicago Botanic Garden in Glencoe every week, and made dried flower arrangements that were sold at the Botanic Gardens’ annual fundraiser each holiday season. Lynn loved to travel. She and her husband Bob (a pilot, himself), flew down to Ft. Lauderdale on vacation every February. She crossed the country on several trips with her son Jimmy; traveled to the East Coast, Yellowstone Park and New Orleans with her daughter Carol and husband Jim; and to Las Vegas many times with her daughter Pat (and Sue and Carol). She loved trying her luck at the Penny Slots! Lynn and her sister Marge would shop at “The Littler Traveler” in St. Charles as often as they could, and took ”mini-trips” with their fun cousins, Sherry & Sandra, when they drove in from Michigan each summer. Lynn was a loving, nurturing mother who instilled strong ethics and values in her children and filled their lives with smiles, hugs, kisses and joy. Every life she touched loved her. We were blessed to have had her as a fantastic, hands-on-mother, as well as serving as the best role model and friend. Lynn is survived by her children Margaret (Lawrence) Burrows Siegal, Carolyn (James) Burrows Douglas, Patricia (Fred) Burrows Mariacher, William Burrows, and Mary Suzanne (Anton) Burrows Till. She was a happy and loving grandmother to Jennifer Siegal Rose; Amanda and Ryan Burrows; and great- grandmother to Aidan James Rose. She is preceded in death by her parents, August and Ruth, husband Robert, sister Margaret, sons Robert Wood Burrows Jr. and James Robert Burrows. A visitation will begin at 11:00 a.m. followed by a service at 12:00 p.m. Tuesday, December 8, 2020 at Burnett-Dane Funeral Home, 120 W. Park Avenue, (Rt. 176, one block west of Milwaukee Ave) in Libertyville. For those that wish to attend virtually, a link has been posted below to watch live funeral footage beginning at 11:30am. Interment will be at St. Boniface Cemetery in Chicago. Memorials may be made in her honor to Chicago Botanic Gardens 1000 Lake-Cook Road, Glencoe, Illinois 60022 A celebration of her life for all who knew her will be held when it is safe to do so. Click the link below to view live funeral footage at 11:30am Tuesday: https://client.tribucast.com/tcid/17373145

The family of Carolyn "Lynn" Burrows created this Life Tributes page to make it easy to share your memories.

Send flowers to the Burrows family.