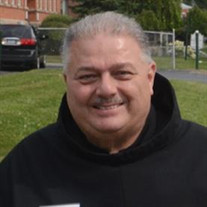 Br. Angelo Catania OFM Conv. died on November 13, 2019, in Libertyville IL. He was born Carmen Joseph Catania on March 22, 1942, to Frank and Lillian Rosalia (Russo) Catania in Oak Park IL. He was predeceased by his parents, and is survived by his brothers Guy and Frank, along with a number of cousins, nieces, and nephews. He professed Simple Vows as a Conventual Franciscan on July 15, 1963, and Solemn Vows on July 15, 1966. Most of his decades of Franciscan service were spent in southern Indiana at the Mount St. Francis Center for Spirituality, or in Carey OH at the Basilica and National Shrine of Our Lady of Consolation. Through those years he worked in several different areas: cook, administration, retreat center staff member, and as part of the Shrine’s pilgrimage team. His last period of service was at Marytown, the National Shrine of St. Maximilian Kolbe in Libertyville IL, greeting pilgrims around the Shrine and in the Gift Shop. When he wasn’t greeting the buses at the Shrine in Carey, Br. Angelo was famous for his ‘park-bench ministry,’ either moving from person to person, or sometimes simply staying in one place as the pilgrims came to greet him. He listened to their stories, sharing in their joy or consoling them in their sorrows. “Brother Angelo will be remembered by thousands of pilgrims to Carey,” said Bishop John Stowe OFM Conv. of Lexington KY. “He was often the face of hospitality for the shrine: he relished greeting the pilgrims as they arrived on buses and sending them off with prayer as they departed. He was also known to have sung a verse of ‘That's Amore,’ especially with Italian-American pilgrims.” “Br. Angelo excelled at the ministry of presence,” said Friar Jim Kent OFM Conv. “He had an ability to be truly with people, and always tried to be aware of others’ needs. He had such a listening heart and understood the value of giving people his time. He left a lasting impression on people.” Br. Angelo’s cousin Ronald Catanzaro said “He was a true son of St. Francis for more than 50 years. He was a great family member, always present in our lives. He’s going to be missed by all.” A funeral Mass will be celebrated on Monday, November 18 at noon in the Chapel at Marytown (1600 West Park Avenue, Libertyville IL 60048). There will be visitation and a funeral Mass at the Basilica of Our Lady of Consolation in Carey OH on November 20. At Mount St. Francis IN there will be a funeral in the Chapel on November 26, with burial following in the Friars’ cemetery. Memorial gifts may be made to the Province of Our Lady of Consolation, 103 St. Francis Boulevard, Mount St. Francis, IN 47146. For more information and photographs from Br. Angelo’s years of service, please visit the Province website: www.franciscansusa.org

Br. Angelo Catania OFM Conv. died on November 13, 2019, in Libertyville IL. He was born Carmen Joseph Catania on March 22, 1942, to Frank and Lillian Rosalia (Russo) Catania in Oak Park IL. He was predeceased by his parents, and is survived... View Obituary & Service Information

The family of Brother Carmine Angelo Catania created this Life Tributes page to make it easy to share your memories.

Send flowers to the Catania family.