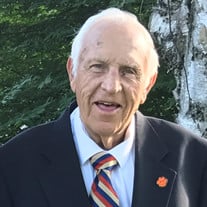 Bruce "Otto" Priebe, 90, passed away on Wednesday, April 8, 2020 at Advocate Condell Medical Center. He was born on October 15, 1929 in Libertyville, Illinois and was a proud lifelong resident. Bruce graduated from Libertyville Township High School in 1947. He was stationed in Japan for two years during the Korean War. He was employed by The Frank G. Hough Company (later International Harvester Corporation and Dresser Industries) for over 40 years before his retirement. Bruce was also a former assistant chief and volunteer firefighter for the Libertyville Fire Department for many years where he developed lifelong friendships with the other firefighters. Bruce and his family spent many enjoyable summers in St. Germain, Wisconsin camping, fishing, and visiting with friends. He was an avid woodworker and volunteered his time assisting with the Adult Education program at Libertyville High School helping others to become more skillful at woodworking. Bruce was an avid storyteller, and truly enjoyed spending time with family and friends. He regularly shared stories from his earliest jobs working for Wayne and Genevieve Gratz on their farm, assisting his father to care for Dr. Galloway's property in Libertyville, and setting pins at the local bowling alley for a penny a pin. Bruce thoroughly enjoyed going to garage and estate sales, adding regularly to his wide variety of collectable items, especially old tools. Surviving are Bruce's two children, Douglas Priebe and Susan (Bill) Jahncke, and two grandchildren, Bruce and Katie Jahncke. He was preceded in death by his parents, Otto and Minnie Priebe, by his wife of 53 years, Marlene, who passed away on November 7, 2007, and brothers George, Jack, Bob, and infant twins Harold and Howard. A visitation and funeral service for his family will be on Tuesday, April 14 at the Burnett-Dane Funeral Home in Libertyville with interment at Lakeside Cemetery. A public celebration will be held when the pandemic is over. Memorials can be made to either the Lakeside Cemetery Renovation Fund or the Paramedic Unit of the Libertyville Fire Department. Info: 847-362-3009 or please share a memory at Burnett-Dane Funeral Home

The family of Bruce "Otto" Priebe created this Life Tributes page to make it easy to share your memories.

Send flowers to the Priebe family.