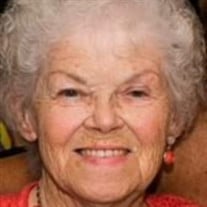 Betty L. Quilty (nee Bauer), 89, of Grayslake, Illinois died peacefully on January 1, 2022, after a brief illness. Betty was born February 13, 1932, in Antioch, Illinois to Louis and Marcella Bauer. As the youngest of three children, Betty often said that she had the perfect childhood. After graduating from Antioch High School, Betty began her career as a switchboard operator at Illinois Bell. In 1955, she married Patrick J. Quilty. The following year, the couple became the proud parents of twins Patrick Jr., and Bridget Mary. Betty then happily stayed home, raising her two children for the next 17 years. During those years, Betty participated in the “Mother of Twins” bowling league, carrying 180 average. Betty loved being a mom and reveled in being able to be an active presence in her children’s lives and at their school. Betty rejoined the workforce in 1974 as a switchboard operator at American Hospital Supply and Baxter Healthcare, eventually managing switchboard operations. She loved her work, and those around her loved her, including giving her the “American Pro” award recognizing the year’s most valued employee. Her ready smile, quick wit, and work ethic made her a joy to work with. Left to cherish her memory are her children, Patrick (Michelle) and Bridget (Steve) Olson; Grandchildren Ross (April) Guerin, Allison (Josh) Behling and Connor Quilty; great Grandchildren Camden, Caleb and Amelia Guerin; as well as dozens of nieces and nephews. Betty was preceded in death by her husband, Patrick, her parents Louis and Marcella Bauer, her brother Donald, treasured sister, Darlene and brother-in-law Donald Hoem. A memorial is being planned for the spring when we can all gather to remember a one-of-a-kind woman. Burnett Dane Funeral Home is assisting the family.

The family of Betty L. Quilty created this Life Tributes page to make it easy to share your memories.

Send flowers to the Quilty family.