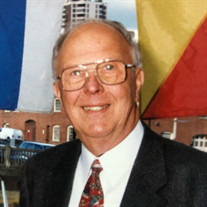 Arlyn E. “Al” Albrecht, 84, passed away on Friday, April 23, 2021 in Libertyville, IL. He was born on April 14, 1937 in Fairwater, WI, was raised in Brandon, WI from age 6 on. He was a graduate of the University of Wisconsin – Madison, where he earned his Master’s degree in Civil Engineering and also met his wife, Betty. After leaving the US army in 1962, he began his career as a civil engineer in Milwaukee, WI, later being recruited to Clark Dietz, Inc (CDI) in Champaign, IL. He soon was asked to expand CDI and open a Chicago branch, therefore moving his family to Libertyville, IL. At the age of 50, Al purchased CDI, expanded it to three more locations, Kenosha, WI, Evansville, IN and Indianapolis, IN, and brought it from a 2 million dollar company to a 20 million dollar company in 15 years. He retired as president of CDI at age 65, however, was then asked to work as the general manager of the Lake County Public Water District, in Zion, IL, which he did until he was 79 years old. Al was a member of St. James Lutheran Church in Lake Forest, IL, and he enjoyed fishing, gardening, birds, and all things nature, taking pride in donating to nature conservancies. Surviving are his two children, Mary (Terry Sullivan) Albrecht and Steven Albrecht; four grandchildren, Joseph Albrecht, Sara Albrecht, Katie Albrecht, and Meagan Sullivan; daughter-in-law Jan Albrecht (Kenneth); and loving companion for the past three years, Patricia “Pat” Johnson. He was preceded in death by his wife, Elizabeth “Betty” Albrecht in 2015 and by his son, Kenneth Albrecht, also in 2015. A visitation will begin at 1:00pm followed by a service at 4:00pm, Wednesday April 28, 2021 at Burnett-Dane Funeral Home, 120 W. Park Avenue (Rt. 176, one block west of Milwaukee Avenue) in Libertyville, IL. In lieu of flowers, memorial donations can be made to The Nature Conservancy. For info call 847-362-3009 or share a memory at www.burnettdane.com.

The family of Arlyn "Al" Albrecht created this Life Tributes page to make it easy to share your memories.

Send flowers to the Albrecht family.