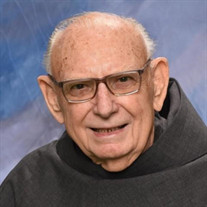 Father Anthony Labedis OFM Conv. died on February 8, 2021 at St. Joseph Home for the Elderly in Palatine, IL at the age of 87. He was born in Kewanee, IL on May 29, 1933, the first of eight children born to Anthony and Stacy (nee´ Sopiars) Labedis. He attended the then-St. Stanislaus Church and school, graduating from 8th grade there in June of 1947. He then attended St. Mary’s Minor Seminary in Crystal Lake, IL under the direction of the Conventual Franciscan Friars. After graduating from St. Mary’s in 1951, he entered the novitiate of the Conventual Franciscans in Lake Forest, IL in the autumn of 1951. He made his 1st profession of vows as a Franciscan friar on August 14, 1952 and Solemn Profession on August 14, 1955. He studied philosophy and majored in Science at Loyola University Chicago from 1952-56. He then entered the major seminary of the Conventual Franciscan Friars in Chaska, MN and was ordained to the priesthood on February 21, 1960 by then Archbishop William O. Brady. His first assignment after ordination was as a teacher at Bishop Montgomery High School in Torrance, CA, followed by four years at St. Mary’s Minor Seminary in Crystal Lake, IL. In 1966, he volunteered to serve as a missionary to Australia where he ministered to immigrant communities, iron ore miners, and sheep herders. In 1972, he returned to the U.S. serving in various parishes in the Midwest, including as Pastor of St. Anthony of Padua Parish in Rockford, IL. In 1989, he was elected Vicar Provincial and Treasurer of St. Bonaventure Province. He served three consecutive terms as Minister Provincial, from 1994-2005. He then returned to St. Anthony’s in Rockford to serve as Associate Pastor and, eventually, Pastor. In 2010, he moved to Holy Family Catholic Church in Peoria, IL where he remained until declining health necessitated his move to St. Joseph Home for the Elderly in Palatine, IL in 2020 and where he remained until his death. Fr. Anthony is survived by his sister, Dolores and his brother, Joe as well as many nieces and nephews. He was preceded in death by his parents; his three brothers, Thomas, Bernie and Andy; and his sisters Marie and Anita. Among his many gifts, Fr. Tony will be remembered for his lively sense of humor, his skill at storytelling, and his willingness to joyfully serve wherever he was asked by his Franciscan superiors. Visitation will be held from 10am-11:30am followed by Mass at 11:30am on Thursday, February 11, 2021 at St. Anthony of Padua Church, 1010 Ferguson St., Rockford, IL 61102. A second visitation will be held from 4pm-7pm followed by a Franciscan Wake Service at 7pm on Friday, February 12, 2021 at Holy Family Catholic Church, 3720 N. Sterling Ave., Peoria, IL 61615. A funeral Mass will be celebrated at 11am at Holy Family on Saturday, February 13, 2021 followed by interment at Mt. Olivet Cemetery, 1000 Pleasantview Ave., Kewanee, IL 61443.

Father Anthony Labedis OFM Conv. died on February 8, 2021 at St. Joseph Home for the Elderly in Palatine, IL at the age of 87. He was born in Kewanee, IL on May 29, 1933, the first of eight children born to Anthony and Stacy (nee´ Sopiars) Labedis.... View Obituary & Service Information

The family of Fr. Anthony "Tony" Labedis created this Life Tributes page to make it easy to share your memories.

Send flowers to the Labedis family.