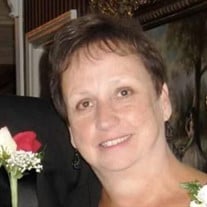 Alice C. Dehn, 70, passed away on Tuesday, June 2, 2020 at Advocate Condell Medical Center in Libertyville, IL. Born September 12, 1949 in Evanston, IL, she was the daughter of the late Walter Oslund and Edith Pearson Oslund. Alice graduated from Glenbrook South High School in 1967 and married the love of her life, Paul, in 1970. She had been a 47-year resident of the Lake County area, where she was a former receptionist at a medical office in Libertyville for many years. Alice will be remembered as very social wherever she went and loved crossword puzzles, music, spending time with family, and most of all her grandchildren. Surviving is her daughter, Jami Dehn; 2 grandchildren, Elisa Portilla Dehn and Noah Portilla Dehn; daughter-in-law, Cindy Portilla Dehn; sister-in-law, Patti Heinz, and many nieces and nephews. She was preceded in death by her beloved husband Paul Dehn on May 2, 2020, her son, Jason Dehn on September 12, 2017, brothers, Bill, Bob and Dick Oslund and her sister, Judy Speakman. Private services are being held at Burnett-Dane Funeral Home in Libertyville, IL. Interment will be at Lakeside Cemetery in Libertyville. For info: 847-362-3009 or share a memory at www.burnettdane.com.

The family of Alice C. Dehn created this Life Tributes page to make it easy to share your memories.

Send flowers to the Dehn family.