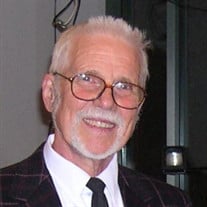 Albert C. Claus, 91, passed away on Saturday, April 9, 2022 at his home in Vernon Hills, IL. He was born January 17, 1931 in Chicago, IL. When he was 5 his family would move to Mt. Prospect, IL. After marrying and starting a family, he would move to Vernon Hills, IL where he has lived the last 50 years. In 1952, Al received his undergraduate degree in Chemistry from Northwestern University, where he earned Phi Beta Kappa honors. In 1958, he received his Ph.D. in Physical Chemistry from the California Institute of Technology (Caltech) and in 1973 a Master’s degree in Mathematics from the Illinois Institute of Technology (IIT). Shortly after receiving his Ph.D. he would follow a boyhood dream to spend some time in Alaska as a visiting professor at the University of Alaska. During his summers he passed his time following his interests of hiking, mountain climbing, and photography. While visiting Camp Denali near the base of Mount McKinley he would meet Alison Smith, who would later become his bride. He returned home to Chicago to take a job and get married and spent nearly 50 years as a Professor of Physics at Loyola University. While his boys were growing up, he would coach little league baseball and was a Cub Scout Pack leader for many years. Al had many interests, including, radio astronomy, stamp collecting, gardening, and baseball. About 30 years ago he took a beginning machine shop class at the College of Lake County (CLC). He enjoyed it so much that he would become a fixture at CLC and an accomplished machinist. Surviving are his wife of 60 years, Alison Claus; 2 sons, Arthur Claus and Laurence (Katherine) Claus, 5 grandchildren, Noah, Nathan, Isaac, Leah and Grace, niece Christy Claus-Hicks (Jeremy), nephew Walter (Melissa) Claus and several great nieces and nephews. He was preceded in death by his 3 brothers, Robert, Laurence and Richard Claus. A memorial gathering will be held from 4:00 p.m. until 7:00 p.m. Thursday, May 12, 2022 at Burnett-Dane Funeral Home, 120 W. Park Ave. (Rt. 176, one block west of Milwaukee Ave.) in Libertyville. For info: 847-362-3009 or share a memory at www.burnettdane.com. In lieu of flowers, the family asks that you make a donation in memory of Albert to support the Department of Physics at Loyola University Chicago. Gifts may be given online at www.luc.edu/claus, or a check can be mailed to Loyola University of Chicago, Gift Processing, P.O. Box 4336, Carol Stream, IL 60122-4336. Checks should be made payable to “Loyola University Chicago.” Please note “Claus – Physics” in the memo line.

Albert C. Claus, 91, passed away on Saturday, April 9, 2022 at his home in Vernon Hills, IL. He was born January 17, 1931 in Chicago, IL. When he was 5 his family would move to Mt. Prospect, IL. After marrying and starting a family, he would... View Obituary & Service Information

The family of Albert C. Claus created this Life Tributes page to make it easy to share your memories.

Customized sympathy cards. Mailed for you.